ERGONOMICS IN THE WORKPLACE

(How to Stay Healthy Behind the Computer Screen)

Surprisingly enough, ergonomics in the workplace, something that is directly related to our long-term health and well-being, is a subject that is too often ignored or taken for granted by the majority of people in the workforce, in any field of occupation.

Even regular people at home don’t pay much attention to it.

This is especially worrying today more than ever before since most of us now spend the majority of our time behind the computer screen doing all kinds of stuff that were not possible or imaginable just ten years ago.

We’re talking about NOT only work-related stuff!

Just think about it:

Facebook, youtube, twitter, newspapers, magazines, skype, office software, emails, all these and websites have made it possible to do almost everything today through the power of a computer with an internet connection.

This More time spent behind the computer screen, and we haven’t learned how to cope with it because it’s a relatively new situation for us or that we take it for granted because it doesn’t look too “dangerous” to be taken seriously.

I mean, laptops were even meant to be casually used for small and quick matters, but today, we’re using them more than desktop computers.

We’re using them AS desktop computers.

With this drastic change of lifestyle, we have to adapt ourselves to the environment we’re in and to new technologies whenever made available, and this includes, learning how to effectively and more importantly, healthily, use them properly.

Afterall, new technologies come and go, but our health is forever all we got.

I hope with this article to spread awareness about the topic and give you the information you need in order to start working more healthily from now on.

Work Ergonomics: new technologies come and go, but our health is forever all we got. Click To Tweet

There are lots of health-related problems that you risk having should you totally ignore ergonomics.

Here’s what (actually) would happen to your health and body in the long run:

Assuming one position (Sitting) for several continuous hours will damage your blood circulation in the body and cause fatigue and muscle stiffness.

Bad posture while sitting on the chair for long periods of time may cause permanent or difficult-to-treat posture problems and deformations if not dealt with early on.

– NECK: Bad posture can cause neck pain and stiffness.

– BACK: As well as back pain up to real damage.

– SHOULDERS: Unrest in the shoulders area due to wrong posture will lead to shoulders pain over time.

– HANDS & ARMS: Pain to these organs due to awkward and repetitive movements (Also called “overuse injury”). Including pain and weakness to elbow, wrist, and even the fingers.

– EYE: Eye strain is a common issue among computer users. Staring at the screen for long periods of time can cause a lot of discomfort in your eyes. This includes watery eyes, dry eyes, blurred vision, and even headaches. 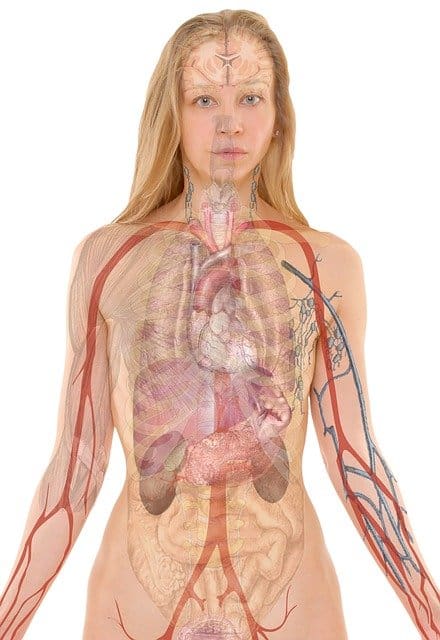 ‘As you noticed, your entire body is involved and at risk with the simple act of sitting behind the screen.
So it is imperative that you acknowledge these risks and learn how to deal with them and prevent any future health problems’

Now that you understand (Hopefully) how important ergonomics at work and home really is, let’s see how you can fix it, and identify the best sitting position while working behind a desk and best working practices.

Below, you’ll see an incredible infographic that illustrates and summarizes this whole issue.

It doesn’t take a lot of effort or time to assume the correct sitting posture, you just have to learn what it is, and remember to assume it whenever you resume your work or even during work, as you’ll find yourself unconsciously drifting away from it throughout the day.

It’s hard to stay in one position for several consecutive hours, even if it is the correct working position, because our bodies are constantly requiring us to move and change positions to enhance blood flow and stay healthy.

You might say, how then am I supposed to keep a correct posture? Easy. Take a break every 30 – 60 minutes. And it doesn’t even have to be a long break, just a walk around the office for 2 to 5 minutes is normally enough.

So what is the correct way of sitting and working behind a desk?

Check the illustrations below: 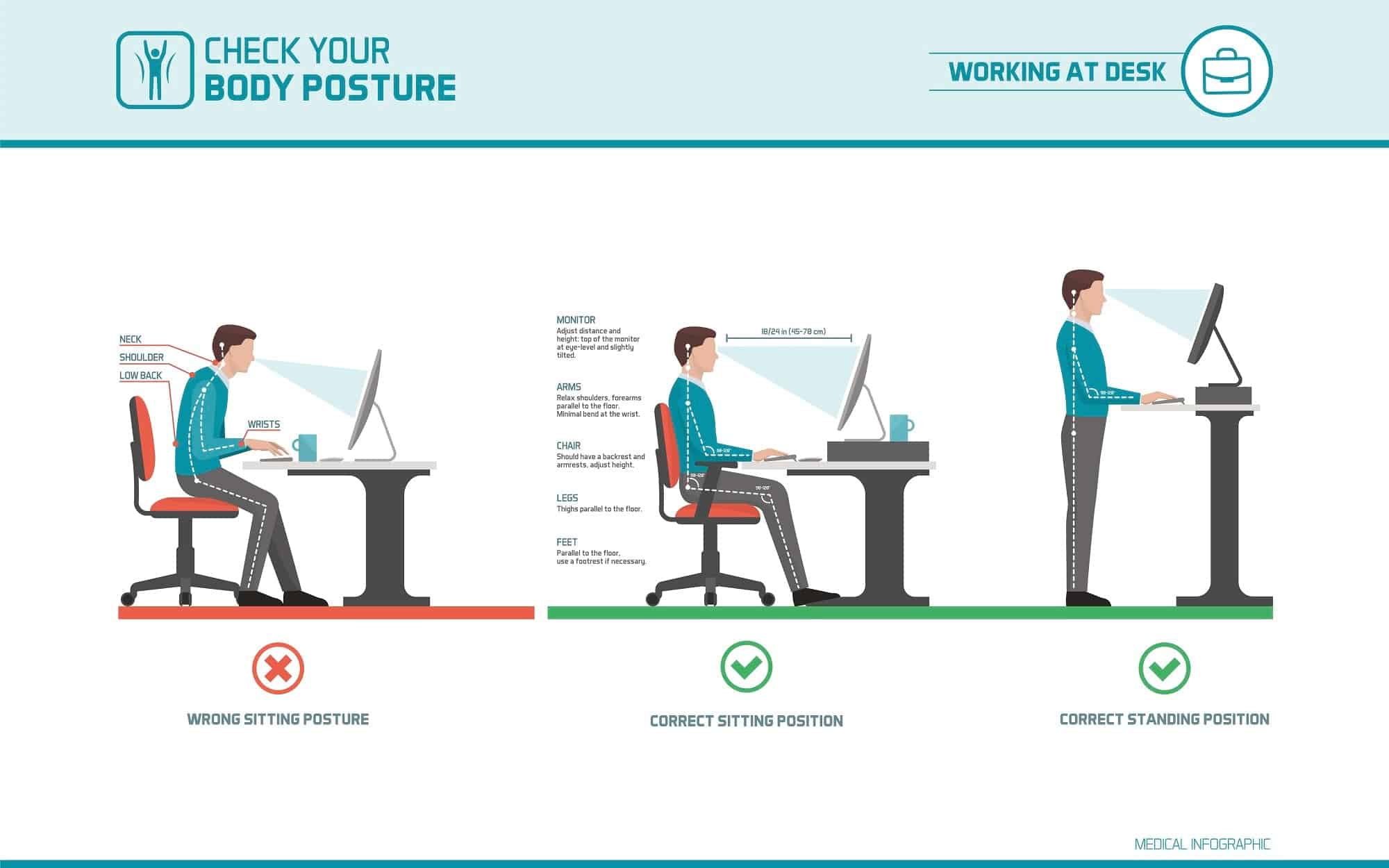 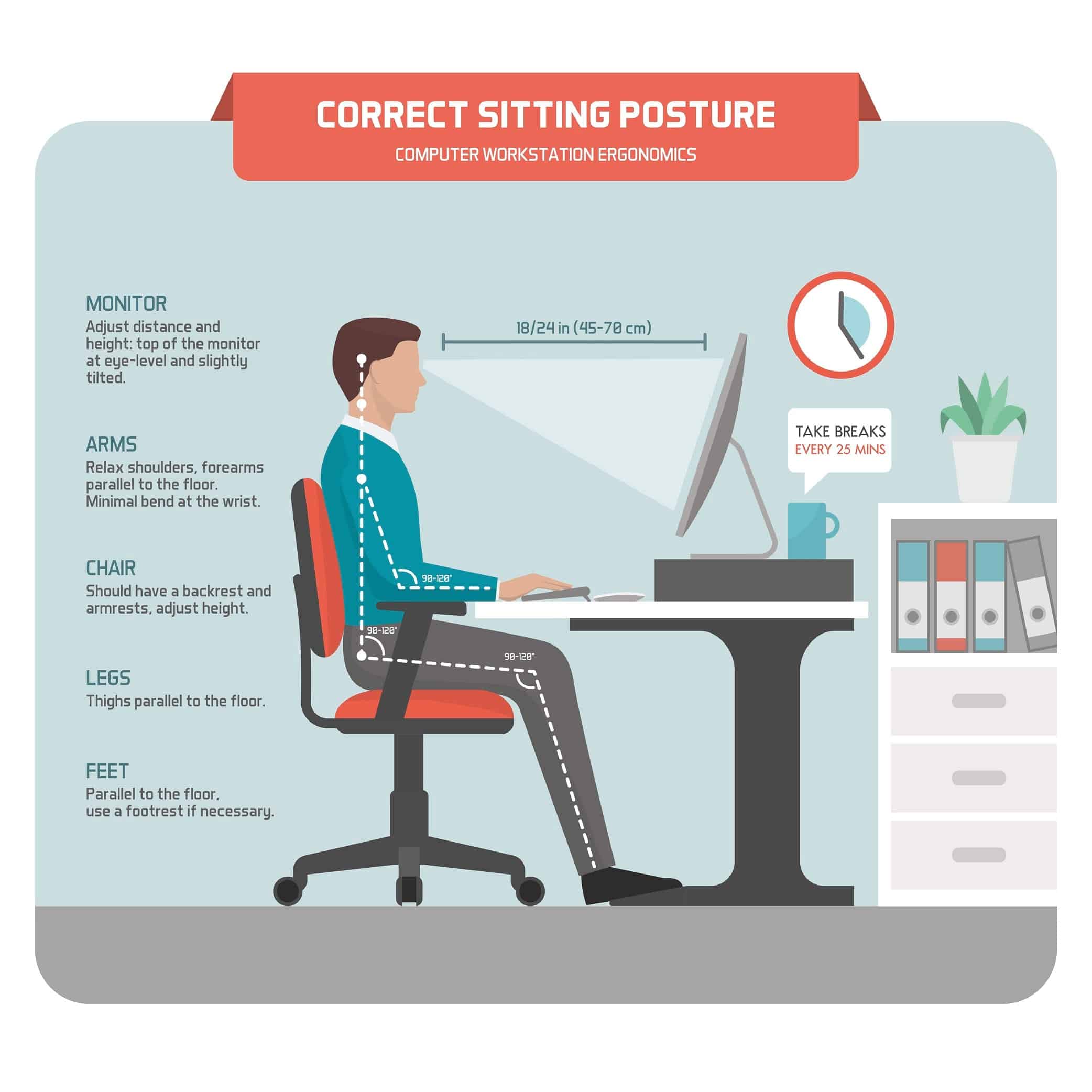 Adjusting the monitor’s height to be at eye-level will make sure your neck and back are at the right position. While almost all monitors today come with the option to adjust height, this is a nightmare for laptop users.

There is no way to adjust the height of the laptop’s screen out of the factory, so we’ll have to improvise something.

You can check our chosen collection of portable laptop stands here or on our blog.

Distance from the screen: 45-70cm is considered a good number.

Adjust the chair to support your back in a 90-120 degree, this is the best position for your spinal cord.

It should also have armrests so you can lay your arms on them while reaching for the keyboard. This will allow both your arms and shoulders to be relaxed and prevent any stiffness or pain in the area.

Legs and feet should be parallel to the floor as possible, and relaxed. If necessary use a footrest to achieve this position.

Your shoulders should be relaxed (Armrest), your forearms parallel to the floor, and there should be minimal bend at the wrist area at all times to prevent wrist stiffness, pain, and sometimes even damage in the future.

Taking a break every now and then (Other than the designated breaks) will improve your blood circulation and relief your body organs after they’ve been stretched to stay at one sitting position for a while.

Not only that, as we mentioned previously, eye strain is a common issue among heavy computer users. Taking breaks more often will help relieve the eye and prevent future complications in that area.

TIP: Every 20 minutes of looking at the monitor, look away (Preferably at something distant) for 20 seconds. This is called the 20-20 rule.

As you see, ergonomy is very important, so often is overlooked, but also, is very easy once you learn how.

Simple actions as adjusting the monitor’s height, taking breaks more often, or having a footrest at our disposal will drastically improve our long-term health for the future and make us feel more comfortable and at ease while at the workplace.

You have to take ergonomy seriously because it’s directly related to our health whether we like it or not.

Save this post, bookmark it, share it, look at the amazing infographic provided above – They summarize a thousand words on ergonomy and the correct sitting posture, after all, we all want to work and provide for our families, but our families want us to stay safe while doing that as well.

Remember the information you’ve learned in this post, implement them, and you’ll be safe behind the office for decades to come.

Want to share something with us or tell us something? Leave a comment below and we’ll reply as soon as possible! 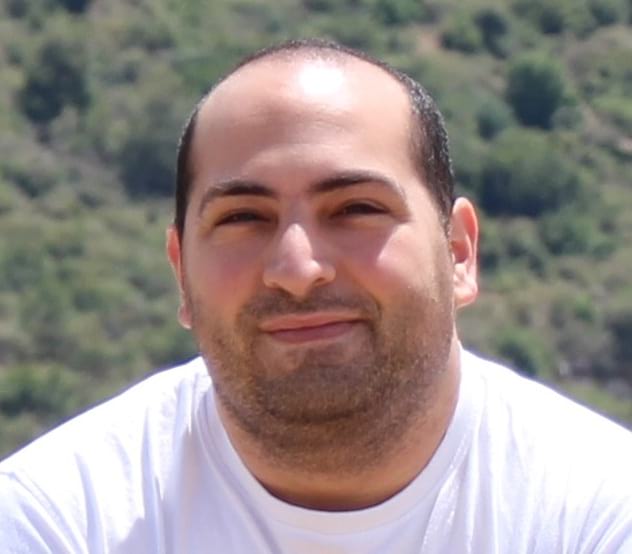 Hi, my name is Elias, and I’m the founder of Portable Laptop Stands.

Aside from my career in the electronic engineering field, I’m a blogger, entrepreneur, online marketer, and a guy who’s very passionate about nature and life.

When I’m not working I love to spend time with my friends, family, and loved ones, I love traveling, going to the beach, a walk in nature, and I love playing Tennis.

Contact me via the social media links below or via my email here at elias@portablelaptopstands.com. 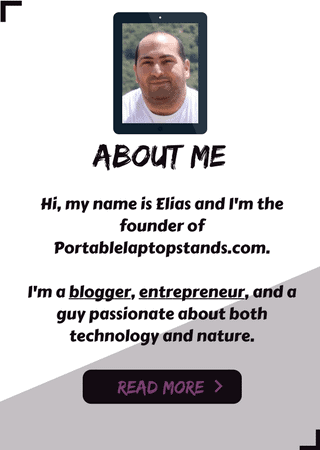 PLS, Portable Laptop Stands, is a blog and a professional reviews site focusing solely on portable stands, desks, and tables for your laptop and MacBook. We're also interested in ergonomy and promote healthy working practices for all professionals.

Check our blog for more reviews and articles about ergonomy at work.